Pay Fixation in the New Pay Structure : The fitment of each employee in the new pay matrix is proposed to be done by multiplying his/her basic pay on the date of implementation by a factor of 2.57.

The figure so arrived at is to be located in the new pay matrix, in the level that corresponds to the employee’s grade pay on the date of implementation, except in cases where the Commission has recommended a change in the existing grade pay. If the identical figure is not available in the given level, the next higher figure closest to it would be the new pay of the concerned employee. A couple of examples are detailed below to make the process amply clear.

The pay in the new pay matrix is to be fixed in the following manner:

Step 1: Identify Basic Pay (Pay in the pay band plus Grade Pay) drawn by an employee as on the date of implementation. This figure is ‘A’.

ii. The level corresponding to GP 8700 is level 13, as may be seen from Table 4, which gives the full correspondence between existing Grade Pay and the new Levels being proposed. 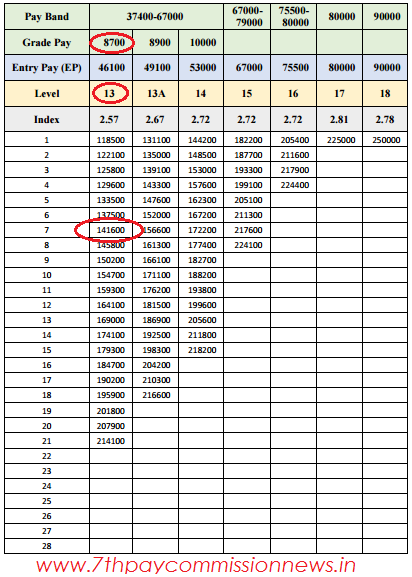 iii. This value would have to be located in the matrix in Level 7 (the upgraded level of T).