The Labour Bureau, an attached office of the M/o Labour & Employment, has been compiling Consumer Price Index for Industrial Workers every month on the basis of the retail prices of selected items collected from 289 markets spread over 78 industrially important centres in the country. The index is compiled for 78 centres and All-India and is released on the last working day of succeeding month. The index for the month of August, 2020 is being released in this press release.

The All-India CPI-IW for August, 2020 increased by 2 points and stood at 338 (three hundred and thirty eight). On 1-month percentage change, it increased by (+) 0.60 per cent between July and August, 2020 compared to (+) 0.31 per cent increase between corresponding months of previous year.

At centre level, Coimbatore recorded the maximum increase of 9 points followed by Salem (7 points) and Madurai (6 points). Among others, 5 points increase was observed in 3 centres, 4 points in another 3 centres, 3 points in 12 centres, 2 points in 14 centres and 1 point in 16 centres. On the contrary, Labac-Silchar recorded the maximum decrease of 4 points. Among others, 2 points decrease was observed in 3 centres and 1 point in 8 centres. Rest of 15 centres’ indices remained stationary.

The indices of 31 centres are above All-India Index and 47 centres’ indices are below national average. 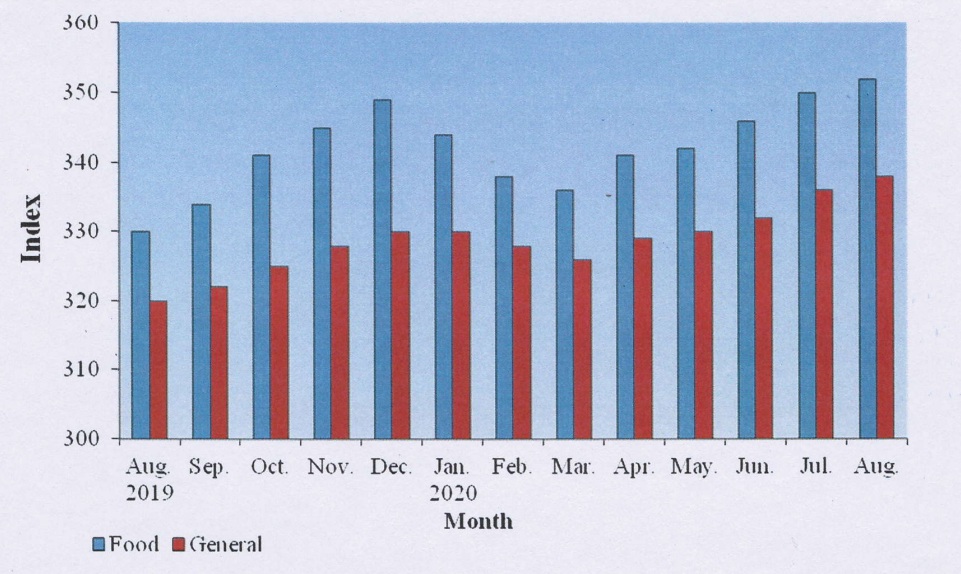 Speaking about the latest index, Shri Santosh Gangwar, Minister of State (I/C) for Labour and Employment said, the increase in CPI-IW will have a positive effect on wages/salaries of industrial workers engaged in organized sector besides Government employees and pensioners. He added that the rise in annual inflation is mainly due to rise in prices of items like Rice, Potato, Brinjal, Onion, etc.

Shri DPS Negi, Director General of Labour Bureau while releasing the index said the All-India Index for August, 2020 stood at 338 with a rise of two (02) points compared to previous month. The rate of annual inflation also increased to 5.63 per cent from 5.33 percent in the previous month but moderated when compared to 6.31 per cent in the month a year before.

He further said that Labour Bureau, inter-alia, compiles and releases CPI-IW every month. This index is utilized primarily for measuring Dearness Allowance (DA) payable to workers in the organized sector including PSUs, Banks and Insurance companies besides Govt. employees.

The next issue of CPI-IW for the month of September, 2020 will be released on Friday 29th October, 2020. The same will also be available on the office website www.labourbureaunew.gov.in.