Ministry of Health & Family Welfare vide their memo-randa referred above has revised the rates of subscription to CGHS for Central Govt. Employees and Pensioners effective from February 1, 2017. Bharat Pensioners Samaj, a Federation of all India central Govt Civil Pensioners Associations including defence civilians. Postal and Railway having over 650 affiliates/associates, has received numerous representations from individual members who retired long back and wish to enroll themselves now under CGHS and also from affiliates on the exorbitant hike in the subscription rates of availing CGHS facilities.

2. BPS wishes to draw your attention to the fact that many of the past pensioners did not join CGHS at the time of their retirement for reason that CGHS had no facilities in the city chosen by the pensioners for their post-retirement settlement, mostly at their native places. Sir, you may be aware that CGHS is available only in 26 cities of India, the latest inaugurated at Visakhapatnam January 9,2017 by your honour along- with Shri M Venkaiah Naidu, Hon’ble Minister for Urban Development, Hoursing & Urban Povetty Alleviation; parliamentary Affairs, UOI. CGHS facilities in 26 cities is too short a medicare facility for 10.81 lac Central Govt Pensioners/family pensioners plus 5.55 lax defence civilian pensioners plus 3.25 lac postal pensioners i.e 19.61 lac of pensioners/family pensioners scattered throughout the country.

3. The old pensioners desirous of joining CGHS now, on opening of center at the place of their residences or their shifting to a place where CGHS facility is available for some family compulsions, may not find it financially viable to subscribe at the new rates especially shedding subscription for ten years to become whole life member effective from February 1, 2017. Para 5(v) of memo dated January 9,2017, under refernece, reads, “Any pensioner/Family Pensioner who is entitled to avail CGHS facility has not so far got his/her pensioner CGHS card made, the rate of contributions in such cases will be with reference to the level of pay that he/she would have drawn in the post held by him/her (at the time of his/her retirement/death) had he/she continued to be in service now but for his/her retirement/death. Sir, a middle level pensioner retired in February, 1994 from the pay scale of 3000-4500/- (level 11) has till now got an increase in his pension to the tune 9.24 times against which his subscription to CGHS now at the new rates contained in memo of January 9, 2017 is hiked by 108.33 times i.e. 78,000/- now against 720/- subscribed in 1994. An illustration, in support of this with full calculations, is attached as an annexure and may kindly be glanced through.

4. Bharat Pensioners Samaj requests you to come to the rescure of old pensioners and advise the Ministry of Health & Family Welfare to review the new rates prescribed keeping in view the financial viability vis-a-vis rising cost of living and not depriving old pensioners of availing the facility at a stage when it is made available to them by the GOI. Fixing of subscription for old pensioners varying with the number of years passed since retirement/death may please be kept low compared to pensioners retired in later years.

with regards,
yours truly, 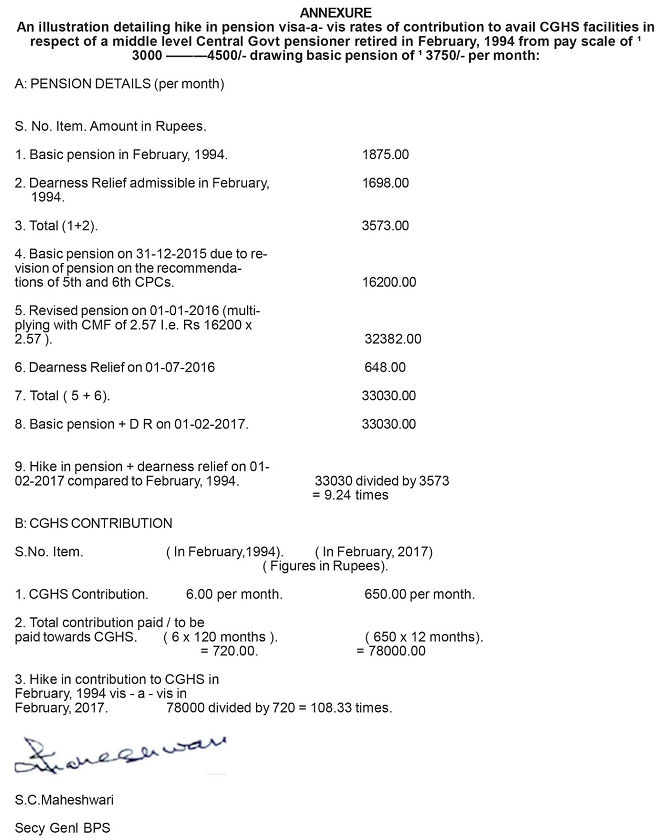