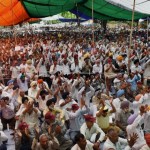 Ex-servicemen hold nationwide protests over OROP delay Upset over the delay in the implementation of the One Rank, One Pension (OROP) policy, ex-servicemen on Sunday held protests across the country, demanding its immediate introduction. The protest comes after talks — both formal and back-channel — with the government failed as the ex-servicemen were not given a specific … END_OF_DOCUMENT_TOKEN_TO_BE_REPLACED