Cabinet approved 6% DA and DR for Central Govt Employees and Pensioners from Jan 2016 Release of additional instalment of Dearness Allowance to Central Government employees and Dearness Relief to Pensioners due from 1.1.2016 The Union Cabinet, chaired by the Prime Minister Shri Narendra Modi, has approved release of an additional instalment of Dearness Allowance (DA) to … END_OF_DOCUMENT_TOKEN_TO_BE_REPLACED 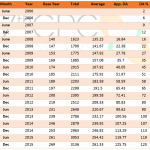 7th Pay Commission DA Calculation – Jan 2016 AICPIN starts with new episode of ‘Expected DA July 2016’ “The first AICPIN points of 2016 will be released tomorrow” The Dearness Allowance given to Central Government employees and Pensioners will henceforth be calculated on the basis of the 7th Pay Commission recommendations from 1.1.2016.(Expects its recommendations to be … END_OF_DOCUMENT_TOKEN_TO_BE_REPLACED 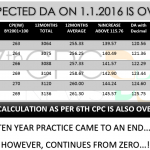 Expected DA on 1.1.2016 is Over – Ends with 6% Hike at 125% Expected DA ends with a 6percentage hike at 125%; Labour Bureau releases the much-awaited AICPIN stats of December The monthly AICPIN statistics points for the month of December 2015 has been released by Labour Bureau. The index is one point decreased and ends with 269. The AICPIN points for the months of July 2015 … END_OF_DOCUMENT_TOKEN_TO_BE_REPLACED 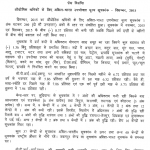 Expected DA Calculation will play vital role in determining Fitment Factor of 7th CPC Expected DA from January 2016 likely to change the Fitment Factor of 7th CPC At the end of the Sixth CPC Regime all the Central Government servants are at the verge of receiving their last installment of Dearness Allowance in Sixth Pay Commission. Almost the DA from January 2016 will be … END_OF_DOCUMENT_TOKEN_TO_BE_REPLACED