Confederation plans protest from Monday; many feel let down by the minimum pay proposed.

The Seventh Pay Commission recommendations did not receive an enthusiastic response from most government employees, with at least one employees’ federation threatening protests. Military officers said their real grievances had not been resolved.

The CCGE has threatened to advance the launch of an indefinite strike it planned from July 11 to July 4. “The government employees had demanded a minimum salary of Rs. 26,000 as against the Rs. 18,000 recommended by the commission,” said an official.

While the Indian Police Service Association did not issue any formal statement, an officer on condition of anonymity said: “What a pity that a few IAS officers decide the destiny of the civil services, treat commission reports so contemptuously, throw the progressive civil service reform agenda into the dustbin.” 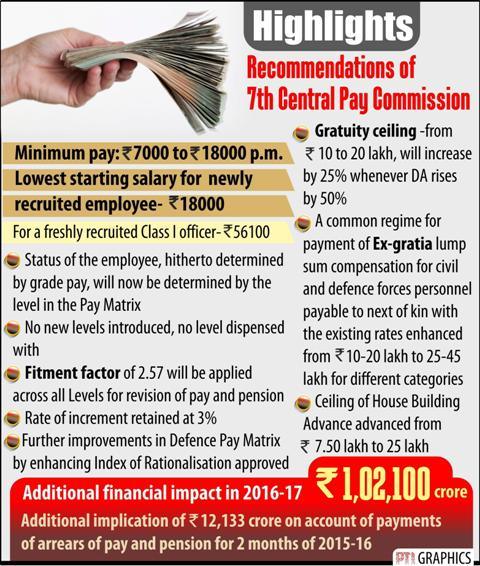 Reacting to the government’s decision, a senior Indian Revenue Service official said the increase in salary was not as high.

An Army officer pointed out that overall the new matrix system would worsen the disparity between military officers and their civilian counterparts. “The last Pay Commission had any way dealt a bad blow to us. This has not only failed to repair the damage but will only worsen it,” he said, referring to the Non Functional Upgrade (NFU) that only the civilian officers enjoy now.

It is in the military that officers stagnate more than any service, because of the steep pyramid. However, we do not get the NFU, whereas civilian counterparts enjoy it,” he said.