Enhancement of powers to Assistant Accounts Officer (Group -B) in DAD: PCDA Circular

To,
The CDA RTC
The IFA (CC)
All Sub-offices
All Sections of Main Office

Sub: – Enhancement of powers to Assistant Accounts Officer (Group -B) in DAD 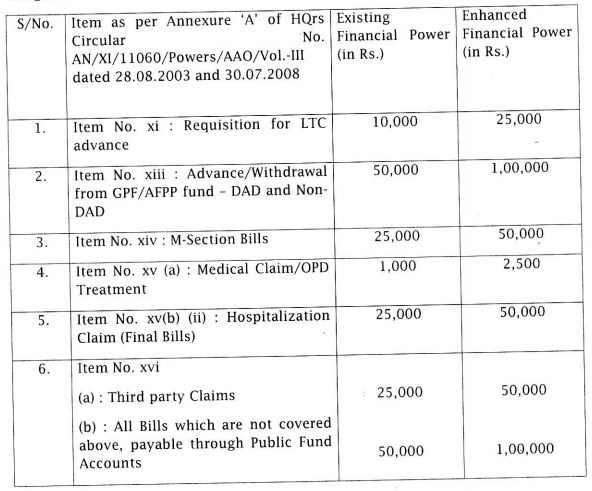 Other entries of Annexure ‘A’ to HQ office circular dated 28.08.2003 will remain the same.

2. It has also been decided that the following “level jumping” shall be introduced:-

a) Two tier processing [Auditor and AAO] – for all bills up to the delegated financial powers of AAO’s as mentioned above.

b) Two tier processing [Auditor + AO/SAO] – for all bills valuing above the financial powers of AAO’s and upto Rs.2 lakhs (Two lakhs only)

c) Three tier processing [Auditor, AAO & AO/SAO] – for all bills exceeding Rs. 2 lakhs and upto Rs. 1 Crore in value in all offices except PCDA New Delhi. This limit shall be upto Rs. 5 Crores in the case of PCDA New Delhi.

3. In the absence of any Time Scale IDAS Officer in an independent sub-office, the PCDA/CDA, after careful consideration and after recording speaking orders in each case, can authorize one or more Ao3 in the sub-office to pass bills for a period not exceeding three months, even when their value exceeds Rs. 1 Crore.