To ALL UNITS AND MEMBERS :

Under the recent 10th Bipartite Settlement, Pay Scales have been revised with effect from 1-11-2012. However, for calculating the Basic pension on retirement, we need to take the average Pay of last 10 months prior to retirement. In the case of employees who have retired during the period from November, 2012 and July, 2013, the previous 10 months period falls both under 9th BPS and 10th BPS. If the Basic Pay/Pay drawn by them under the 9th BPS is taken as it is, it would result in distortion and reduction in Basic pension. Hence, as in the previous Settlement, IBA has issued their Circular clarifying the formula to be adopted in such cases.

In terms of this Circular, in order to bring the Basic pay/Pay at par with the Basic Pay/Pay under 10th BPS, the Basic Pay/Pay drawn by the employees for the relevant period under 9th BPS will be notionally added with DA at 4440 points by adding DA of 60.15% thereon. Thereafter the average of 10 months’ pay would be calculated.

The text of IBA’s Circular No. 874 dated 8th June, 2014 is appended herein for the reference and information of our units and members. 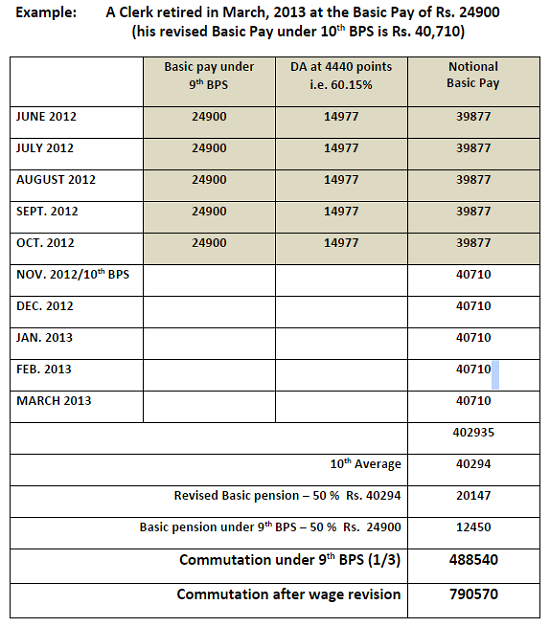 Note: Those drawing Special Pay, PQP, FPP, etc. the same method is to adopted by including those items under Pay and adding 60.15 % of DA to arrive at notional Pay.

Computation of Average Emoluments for calculating pension of employees retired between 1.11.2012 to 31.7.2013