Let us examine the 7th CPC report vide para no 3.65 and 3.66 and the website of Government of India Ministry of Finance Department of Expenditure Pay Research Unit for Brochure on Pay and Allowances of Central Government Civilian Employees visit website : http://finmin.nic.in/pru/BROCHURE/PayAllowance2013-14E.pdf 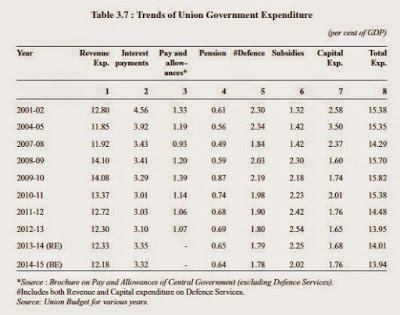 3.65 The total expenditure on pay and allowances for civil personnel of Central Government in the recent years is brought out in Table 9.

Table 9: Expenditure on Pay and Allowances

The Commission has obtained details of expenditure from each ministry/department for up to FY 2012-13. Of the total expenditure on pay and allowances of Rs 1,29,599 crore for the financial year 2012-13.

Total Expenditure for 35 lakhs for Civil Central Government personnel for FY 2016-17 is around Rs 1,83,000 crores In respect of pensions expenditure for 55 lakhs pensioners amount is around  Rs 81,000/ crores as on 1/1/2016. which is against the revenue  receipts of Rs 19 lakh crores. The percentage of revenue receipt and wages is just around 13 % of the total revenue is spent on the wages and pension for the Central Government personnel. In fact it is just at 1.3 % of the GDP.

The 7th CPC recommendations’ impact need not give jitters to the government because the rise in government wages will amount to only 0.4 per cent of GDP.

One more aspect is that technically, the recommendations of a Central Pay Commission are only for Central Government employees and States are not bound to follow suit. Indeed, up to the 1980s, States constituted their own Pay Commissions and prescribed their own pay scales, based upon their fiscal capacity.

Let us not be carried over by the media or press reports, hence we should educate each and every employee for struggle and so that a decent wage hike is achieved.