What central government employees can expect from the 7th Pay Commission

Sounds odd, but the highest paid Indian bureaucrat till 1959 was the railway board chairman and not the cabinet sec 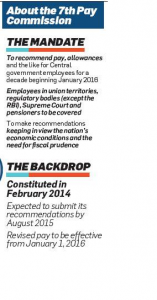 retary. The top rail bureaucrat, who was earlier called chief commissioner of railways, drew a basic salary of Rs 3,250 per month, a smart 8.3% more than that of the cabinet secretary, the senior-most bureaucrat in India. But as the fortunes of Indian Railways dwindled over the years — its market share in freight movement has shrunk from 90% in 1950 to 30% now — the clout of the rail bosses and their corresponding rank and pay have also slipped.

Today, the railway board chairman and eight other top rail babus receive a salary equivalent to a government of India secretary, a scale which as many as 230 Indian Administrative Service (IAS) and 40 Indian Police Service (IPS) officers also draw. For good measure, the cabinet secretary now not only draws a higher salary than the railway board chairman, his superior rank comes with better perks including a bungalow at Prithviraj Road located in the heart of Lutyens’ Delhi.

Meanwhile, the Indian Revenue Service (IRS), a 5,541 officers-strong cadre responsible for collecting direct taxes in India, now claims that IRS should get better pay and perks than IAS. The entry-level salary for all Group A Central services is the same now, but thanks to two more increments and faster promotions, IAS maintains an edge over others. The basis for this claim? “Today, IRS — not IAS — is the revenue collector for the government. So, it’s logical that that the edge given to IAS should be given to us,” says Jayant Misra, Income-Tax commissioner and general secretary of IRS Association. In a 58-page-long memorandum to the 7th Central Pay Commission (CPC), which is now examining a pay hike for Central government employees, the IRS Association argued that the primary reason for higher pay to the Indian Civil Service (ICS) of the British era and its successor service, IAS, was that they were revenue collectors. But now, the dynamics have changed, they claim.
IRS has argued that the net direct tax collection has grown 9.35 times between 2000-01 and 2013-14, an impressive piece of statistics in the backdrop of only 5.4 times expansion of GDP during the corresponding period. Also, the cost of revenue collection in India is one of the lowest in the world, which according to IRS officers is yet another reason for demanding a good deal from the CPC. For every Rs 100 they collect, the tax department spends merely 57 paisa. In percentage terms, the cost of revenue collection in India is 0.57% as against 1.58% in Japan, 1.35% in France, 1.17% in Canada and 1.05% in Australia.

Welcome to the behind-the-scenes manoeuvring before the Big Sarkari Pay Hike. With a new pay scale for 36 lakh Central government employees, and also pensioners, likely to come into effect from January 1, 2016, the officers and non-gazetted staff of various services have been lobbying hard to get a good deal from the 7th CPC. Unlike in the private sector, the pay hike in government is a once-in-10-years-affair, making every CPC, right from the first that submitted its report in 1947, a hugely powerful agency. No doubt, government employees have to undergo an annual appraisal process called Annual Performance Appraisal Report (APAR), but that exercise is important only for promotion, and not for any pay hike. Government employees do get a regular hike in dearness allowance, a measure meant for offsetting inflationary pressure on their earnings, but at the end of the day it is the CPC that fixes the bureaucrats’ pay for 10 long years.
That’s precisely why officers and staff of every service can’t afford to ignore the CPC. Constituted in February 2014 under the chairmanship of retired Supreme Court judge Ashok Kumar Mathur, the 7th CPC has an economist and two bureaucrats as its members. Most of the employees’ associations have already had at least one round of talks with the Commission. And some are waiting for Round II.

A cursory glance at the memorandum submitted by IPS Central Association on behalf of Indian Police Service (IPS) will throw light on the importance attached to a pay commission. The 137-page memorandum, a copy of which was reviewed by ET Magazine, is well designed and comparable to any standard report prepared by a global consultancy firm. PV Rama Sastry, an Inspector General of Police at National Investigation Agency (NIA) and secretary of IPS Central Association says the memorandum is the result of intense in-house research, factoring in the macro environment of growth, development, equity and justice vis-a-vis the role of a police officer. Though Sastry is the spokesperson of 4,720 IPS officers, the memorandum prepared by his team encompasses the role and needs of 30 lakh police personnel across India out of which 10 lakh come under the gamut of the pay commission. As the CPC recommendations are often accepted by the state governments as well, the remaining 20 lakh police personnel too may eventually benefit.

The IPS memorandum has quoted a number of reports to suggest that the tough life of a cop justifies the demand for a fatter hike. For example, it has quoted articles published in two journals — Global Journal of Medicine and Public Health and International Journal of Pharma and Bio-Sciences — to conclude that one of two cops in India suffers from sleep disturbances and anxiety whereas chances of cardiovascular problems increase by 38% after a person joins as a police officer. Among other demands (see What it Expects), IPS wants better life and health insurance cover, an overtime allowance and also a new perk called allowance for “un-social” hours (for duty between 8 pm and 6 am).
Railway officers too cite round-the-clock work demands as a reason for better salary. “A railway officer may be called to join duty any time during the night. The pressure always remains as it’s a 24×7 work,” says RR Prasad, an Indian Railway Personnel Service officer and secretary general of Federation of Railways Officers’ Association. The Indian Railways is a gigantic organisation with over 13 lakh employees, 16,000 of whom are officers. Both the officers and staff associations have made their representations to the 7th CPC. The officers want non-gazetted staff to get their dues but they demand the proportion of the pay of the lowest and the highestpaid employee should increase from current 1:12 to 1:18.

To be sure, a formula towards pay parity has been the hallmark of the last few pay commissions. A government entry-level peon now gets a monthly pay of Rs 14,000, if dearness allowance is factored in. Similarly, a mid-level government driver’s monthly salary, including allowances, is Rs 30,000, at least two times that of his counterpart in a private sector company. And that’s why the salary gap between the lowest and highest paid government servant has drastically decreased over the last three decades.

The pay commissions have also reduced the disparity among the officers of various services. Till the late 1980s, an IAS officer used to receive a salary that’s 25% higher than that of a Group A service officer. Today, the pay for all officers, at least at the entry level, is same. But IAS and Indian Foreign Service (IFS) officers still maintain an edge over others as their empanelment process (a step to get higher posts) is much faster.

An IPS officer can become a joint secretary to government of India only two years after an IAS of the same batch can reach that level. Similarly, there has been a nine-yearlong gap in joint secretary empanelment between IAS and IRS, something many services claim is a continuation of the British legacy. Today, IAS officers at the level of deputy secretary and director at the Centre constitute about only 13% of the total officers. But as the hierarchy goes up, the percentage of IAS vis-a-vis others also rises. For example, 75% joint secretaries to government of India belong to IAS and IFS, and the percentage of IAS and IFS goes further up to 95 in case of government of India secretaries.
“The edge that the IAS has must continue. Why will a person join the IAS after quitting a job in HSBC Bank if that edge is missing? IAS officers have work experiences at Tehsil, sub-divisions, district, state and Central government levels. We interact with the political executives at all levels. IAS should remain a premium service,” says Sanjay R Bhoosreddy, a joint-secretary-ranked officer and secretary to IAS (Central) Association.

The question is how far the 7th CPC will go in changing the pay and associated service conditions like empanelment and promotions. IAS officers have pulled out a 1991 Supreme Court judgement (Mohan Kumar Singhania and Others vs Union of India and Others) where it was said that other services should not approach the pay commissions and attempt to change the rules of career progressions and push for a case for parity with the premier service. But other services are continuing their demand for pay parity and also for the creation of more departments where the IAS can’t dictate. At present, only three major ministries — railways, external affairs and post — are not headed by IAS but run by their own cadres. Now, IPS wants a new department of internal security headed by a cop and IRS wants a separate direct tax department headed by a taxman.

Will the 7th CPC venture into such nuances? Or will it, like the past few pay commissions have, adopt a simple formula of Multiplier 3 under which the basic salary is hiked by three times or more depending on the economic health of the nation. If that is the case, it won’t be too hazardous to make a prediction: A secretary to government of India will get a basic monthly salary (excluding DA) of Rs 2.4 lakh (current basic salary multiplied by three) and the cabinet secretary Rs 2.7 lakh from January 1, 2016. And, yes, perks, DA and other allowances will be extra.