Overtime paid by Railways and Defence ministries constitutes 90% of total 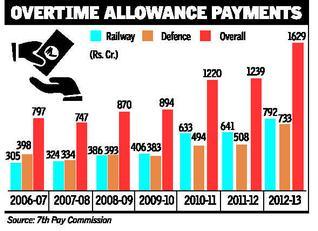 The Seventh Pay Commission has recommended that overtime allowance, except for operational staff and industrial employees governed by statutory provisions, should be abolished, after data showed that the expenditure under the head for the Railways and Defence ministries more than doubled in seven years ending 2012-13.

A committee of secretaries headed by Cabinet Secretary P. K. Sinha is reviewing the Commission’s recommendations. Overall, the overtime paid by the Government increased from Rs.797 crore to Rs.1,629 crore in the period, prompting the Commission to observe that government offices need to increase productivity and efficiency; and recommend “stricter” control on the Centre’s expenditure under the head.

“Government employees, like every one else, should be paid for results, not to spend time in the office…but overtime is mandated by law in organisations like railways and in such cases payments must be realistic and not frozen in time and hence the recommendation to increase them by 50 per cent,” economist and Seventh Pay Commission Member Rathin Roy told The Hindu .

Overtime paid to employees in the Railways is rising faster than even their pay. The compounded annual growth rate of 17.2 per cent for overtime in the ministry exceeds that of pay which is 13.2 per cent. If the government decides to continue with the allowance for those categories of staff for which it is not a statutory requirement, then it should be increased by 50 per cent, the panel recommended.

In the Ministry of Railways, overtime paid to employees is rising faster than even their pay

Read at: The Hindu